Those Who Run With Wolves 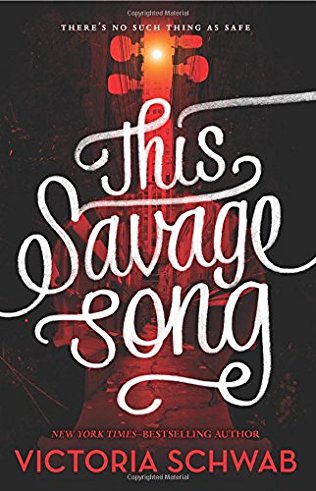 I’ve been wanting to read some of V.E. Schwab’s (or Victoria Schwab) works since I read this SoW review, but two years have gone by until the stars have so I could get my hands in This Savage Song, a YA novel by this author.

It is important to emphasize the fact that it is a YA novel. It does not make it any less entertaining or worse written, but the truth is that I still have to read an “adult” novel by her.

The scenario in which occurs This Savage Song will not please everyone. We are more than accustomed, even somewhat jaded by post-apocalyptic novels and here we can be led to believe that we are facing “another YA post-apocalyptic book”. Although Schwab unfortunately fails to break entirely with the conventions of the genre, it is true that this is not another clone. After the “Phenomenon”, violent acts of people give rise to monsters. I love this idea that violence only begets more violence, it seems a situation tremendously relevant to the current times.

There are three types of these monsters, each with deadly characteristics. To know its features, you just have to have heard this nursery rhyme:

“Corsai, Corsai, tooth and claw,
Shadow and bone will eat you raw.
Malchai, Malchai, sharp and sly,
Smile and bite and drink you dry.
Sunai, Sunai, eyes like coal,
Sing you a song and steal your soul.”

The city where the action takes place is divided into two parts: the northern part pays for protection against attacks while in the south it is the population who defend themselves. The descendants of the two dominant families in each area are thrown together and have to understand each other.

North and South, Romeo and Juliet … many comparisons can come to our minds with this setup, and we will not be wide off the mark, but the author’s work and skill make see, not the over-familiar, but rather focus on the originality of the differences.

The pace is high from the beginning and you can read the novel rather quickly. Although many of the twists and “surprises” are fairly predictable, tension is always on the rise.

The novel closes properly, and although there are still loose ends to solve in the next book, the ending works well on its own.

This is a website for reviewing books we love, with a focus on things by women, people of colour, and other marginalised people (because it is very much NOT a level playing field, and every little bit helps). And also because fabulous things get missed!